Despite the difficult time of coronavirus people still search new destinations to travel. As far as we present you Russia, we would like to inspire you to go there when the first possibility for this will appear. If you read our blog, you have already read about Russian ways of entertainment, Russian traditions etc. Today we would like to continue with the representing of Russia as splendid place to travel to and to find out something new. 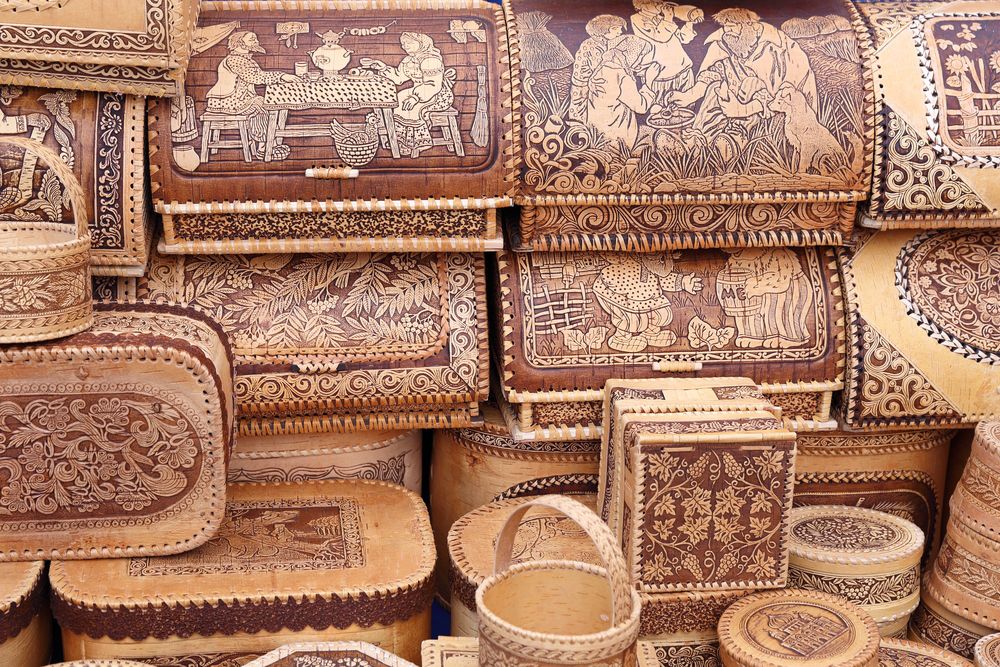 Birch is one of the classical associations with Russia. Russian culture includes a lot of songs and motives about birch where this nice tree interprets as an image of Russia or elegant Russian woman. Except this poetical use of birch Slavic tribes and later Russians developed ways how birch bark can be used in every day life. Firstly, birch bark replaced paper. Till nowadays archeologists find a lot of manuscripts which were written on the birch bark. These manuscripts open not just ordinary everyday life (a lot of manuscripts have the form of short messages as if people used WhatsApp to text but «this version of WhatsApp» was a birch bark) but also retell historical events. Secondly, birch was used for making baskets, boxes, bast shoes etc. In addition to this Russians created from birch bark toys for children and accessories such necklaces, rings, bracelets. Nowadays this type of handcraft is not forgotten and is very actual in some regions of Russia. So, while traveling don`t miss a chance to buy something from birch bark because all these creations are unique and special. And one more last point birch bark: do you know that birch bark can relief a headache? 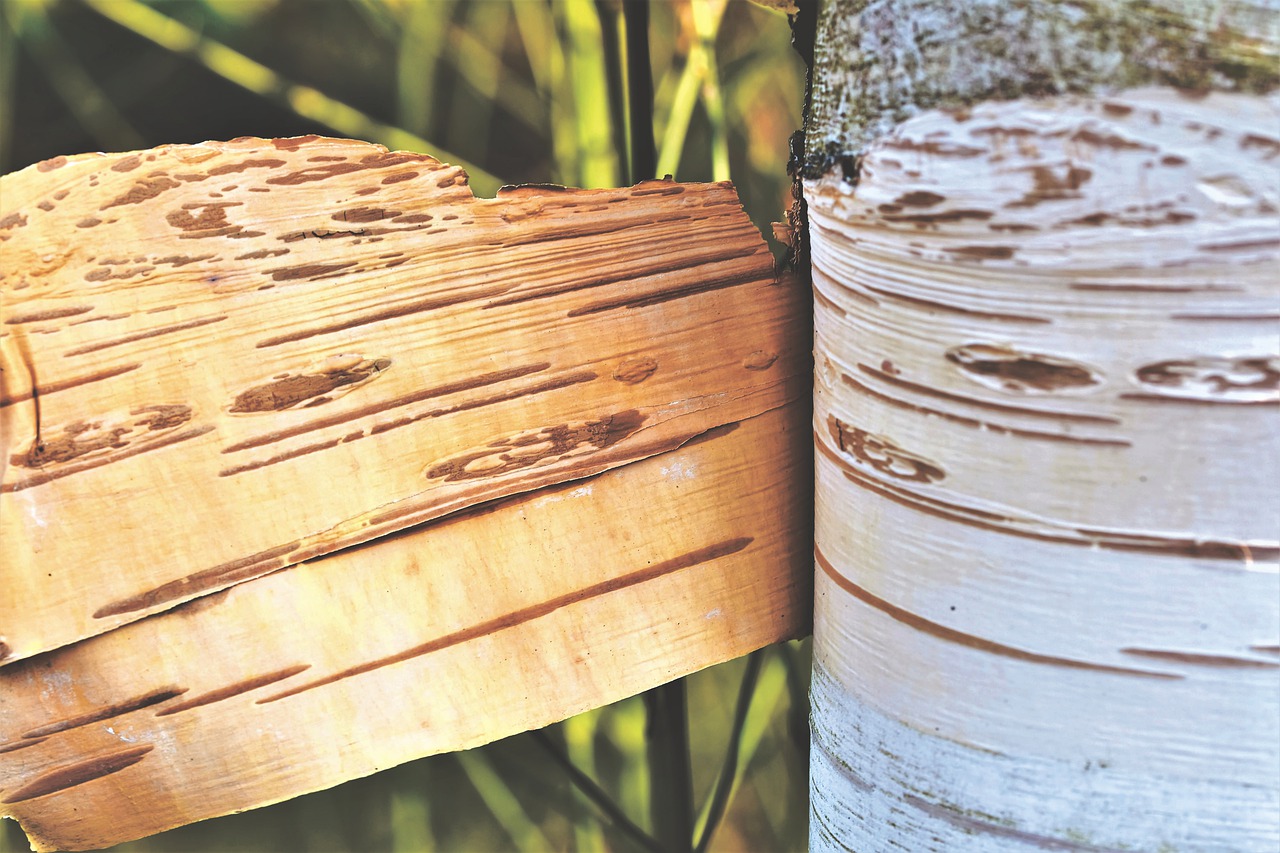 Probably you have not heard about niello and now you are wondering what is this. Niello is a black mixture, usually of sulphur, copper, silver, and lead. Niello jewelry (великоустюжское чернение по серебру in Russian) is well known since 17 century and has its roots in the home city of the Father Frost (read our article about him if you haven’t done it before!) in Veliky Ustyug. Niello as a way of metal processing has two steps to be made. At the beginning a piece of metal should be engraved to get tiny deepenings. After this the black mixture of sulphur, copper, silver were inlayed to the deepenings so the mixture coveres the engraved paintings. After all of these manipulations you can find very nice and remarkable jewelry (e.g. rings or earrings), cigarette case or podstakannik (tea glass holder, you can see them usually in Russian trains).

Do you like lace as Russians do? It would not be false to say that Russian are especially proud of this type of handcrafts. If you take a map of Russia, you should find a city close to the north which is called Vologda. Exactly in this city this famous lace is produced. Despite all modern technologies people who work with lace don’t use any machine or gadget to create it and lace remains handmade. Lace from Vologda is well known for its slender, delicate subtle patterns. These laces can be used an accessory (like on a collar or sleeves) or like tablecloth or napkin. 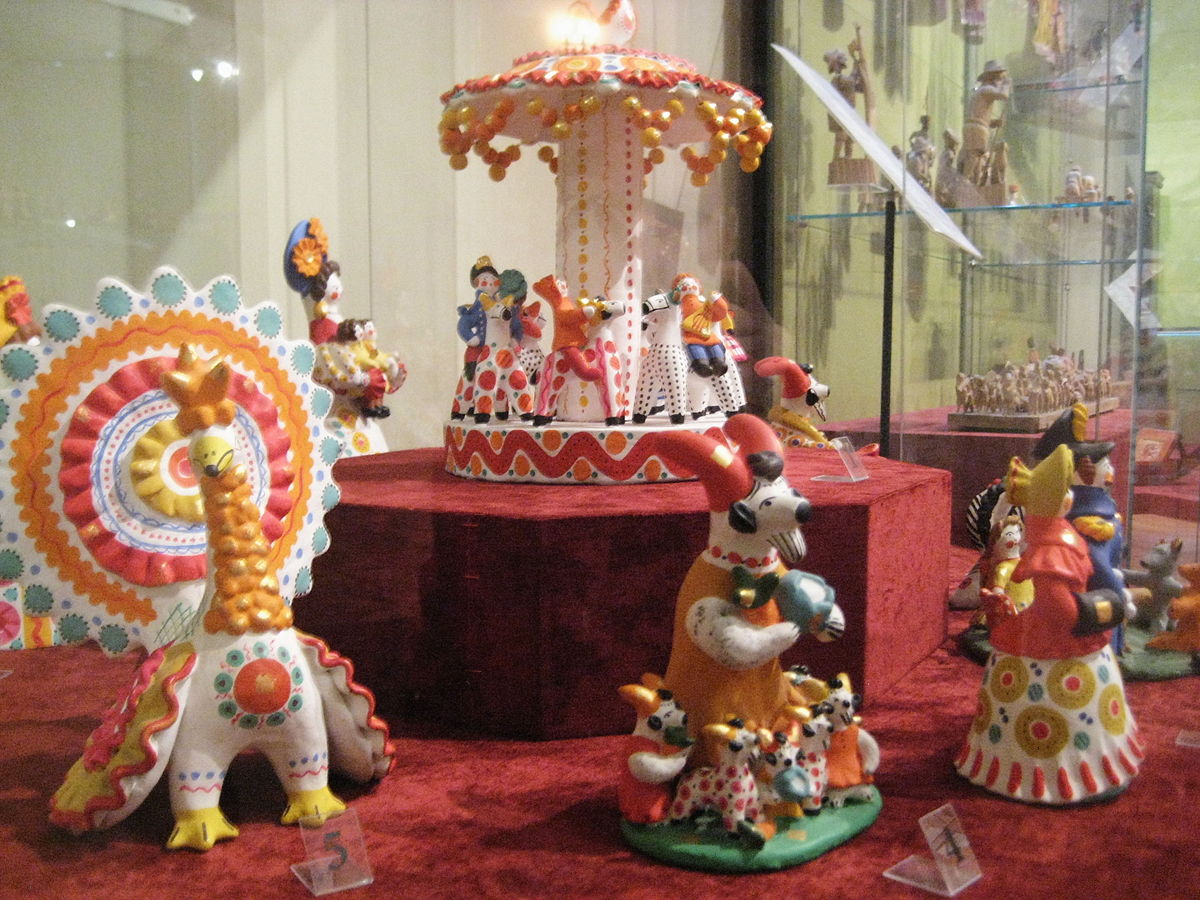 One of the most interesting Russian handcrafts is toys of Dymkovo. These toys are made from clay, have different forms and painted with bright colors. Each toy is unique and has its own pattern which can’t be found on another toy. This type of handcraft appeared in 15-16 centuries near a small country side called Dymkovo and got its name from this place.

Usually the production of these toys began in autumn when people didn’t have to work at fields and save the harvest. A whole family mixed the clay, then mould out small figures of the clay, dried and scorched them. When the clay was ready, toys were covered with nice and colorful ornaments by women. People really liked (and like till nowadays) these small figures which can be used as a part of the home design or as a toy for children. The most typical forms of these toys are horses, cocks, turkey cocks, people. Also, some of these toys were transformed and got a small hole to whistle. Dymkovo toys usually were ready after the entire process of the production at the beginning of the spring and children whistled with these toys calling the spring and summer to come sooner. Nowadays these toys can be found in museums and sometimes on the markets where you can buy them! 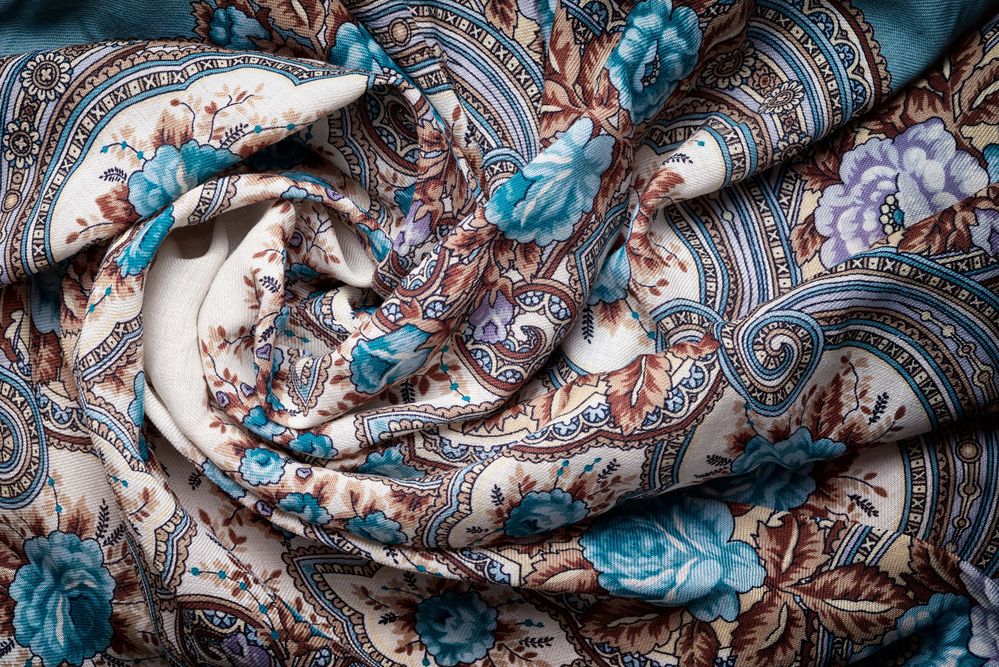 Probably you have already seen bright scarf with floral ornament which Russian women wear in cold times? These scarfs are so called Pavlovo Posad scarfs.

At the beginning of the 19th century, it became fashionable to wear woolen scarfs in Russia. They let women to use a scarf as an accessory and at the same time to keep warm. The first scarfs were produced in the small town Pavlovsky Posad in the Moscow region in the middle of the 19th century. The basic color of the woolen shawls is usually black which allows to put all kind of colors on it. The second main color on these scarfs has always been red, as this color means beautiful in Russian culture. The composition of the ornament is a mixture of large and small floral patterns. Mostly roses are the motives on the scarfs. Nowadays this scarf can be found in another color (e.g. beige basic with floral design). A lot of designers include these scarfs into their collection to underline the origin and authenticity of the Russian culture. Thanks to Pavlovo Posad scarf people around the world recognize Russians or tourists from Russia.

In this article we tried to give you an overview of Russian national handcrafts and we chose the most famous examples of them for you to present. We hope you enjoy this article and you get interested in Russian hand made. Please let us in comments if you like to know more about Russian art!