Home » Blog » The story of the Father Frost

December is the most magical month of the year when almost all the people around the world prepare for the Christmas. In every country, we can find a lot of beautiful Christmas traditions but all of them have one thing in common. No matter how old we are, we still believe (strongly or less) in magician who brings us gifts. Worldwide this person is well known as Santa Claus and today we would like to present you Russian version of Santa – Father Frost (Ded Moroz – Дед Мороз). 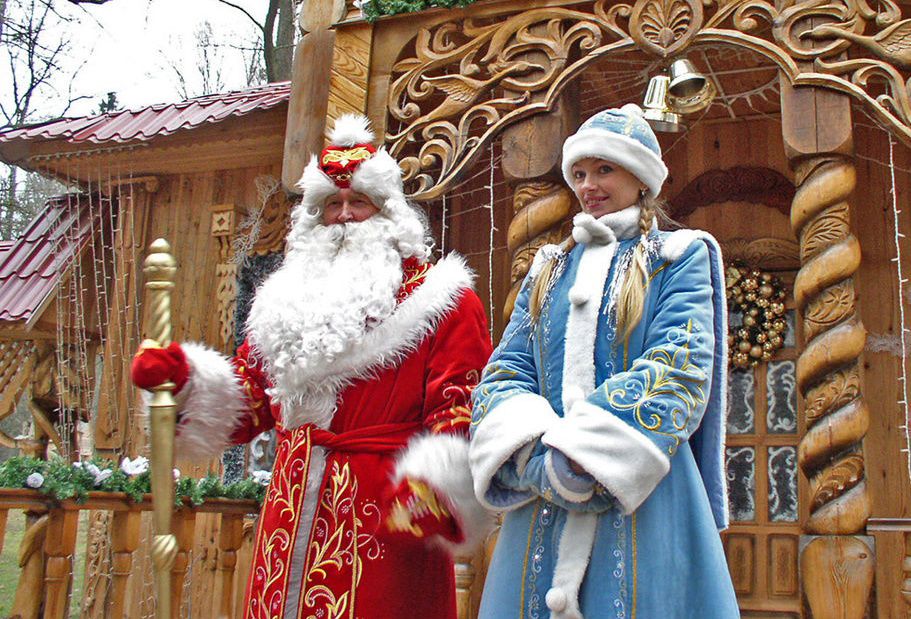 How all of this began

The roots of modern Ded Moroz could be found in Slavic mythology. That times people believed in the power of nature and they considered frost as a reason of a good harvest. To explain why seasons are changed one by one people created a folk legend about small old man with long grey beard who runs around fields and causes biting frost with the noise of his crook. This mythological person was a prototype for modern Ded Moroz.

With the development of arts, especially literature, old Slavic legends transformed and got new forms. In 1840 Russian writer Vladimir Odoevsky published his collection of fairy tales. One of these fairy tales was called «Moroz Ivanovitch». This story was about an old man who lived in a cold country where he entered through a well to and where children could visit him during spring and got encouragement. Despite the idea of giving some treats to children this protagonist was still no real Ded Moroz. Just with the time Russian government thanks to the help of writers and artists created the figure of Ded Moroz. People wanted to create «Christmas Father» who could be as popular and attractive as Saint Nicolaus in Europe.

To bring this idea to life, the concept of Christmas holidays was also transformed. Beginning from the middle of 19th century the Christmas holiday included a program of evening concerts for children called «Christmas tree (ёлка)» and in Russian language came an expression « go to the Christmas tree (идти на ёлку) », literally «go to a Christmas party». These Christmas evenings were usually held by rich people who invited children of their relatives and friends to a somebody’s house where children made a round dance, sang songs and competed whose Christmas costume was better or more beautiful. Usually, the Christmas tree was nicely decorated and children also could use sparkles. At the end of the party into the hall, where children had fun, entered Ded Moroz with a big bag of present for each child. Some years later after the first Christmas evenings such parties were organized everywhere in cities to give all the children a possibility to feel the spirit of coming holiday.

Who is the Father Frost?

While developing the idea of Christmas holiday the figure of Ded Moroz was also changed. That time appeared a biography of Ded Moroz. Now we know that he is a grown-up man who isn`t a young but he is also not old. His birthday is on 18th November, he lives in the city Veliky Ustyug where his residence is located, he wears a heel-length fur coat (usually red, seldom blue), a semi-round fur hat (also red or seldom blue) , and valenki (traditional Russian boots) on his feet. He has a long nice white beard. He walks with a long magic stick and often rides a troika (a traditional Russian way of driving, when three horses are used abreast, usually pulling a sleigh. It`s different from most other three-horse combinations in that the horses are harnessed abreast). Usually, he comes at midnight and put all the presents under the Christmas tree and after he paints nice frostwork on a window-pane. Also, he is accompanied by his granddaughter Snegurochka who is a nice young woman with long blond hair and who wears blue heel-length fur coat. Pretty fast Ded Moroz became the most beloved and kindest magician in Russian Empire.

First years of Soviet regime were very strict and difficult. All attributes of old empire life were forbidden. The fate of Ded Moroz didn`t differ from other parts of the culture and in 1929 he was forbidden. There were several reasons for that: Ded Moroz was a symbol of Christmas (Christmas as religious holiday was forbidden and replace by the New Year holiday), he was also irreal (Soviet people had to believe just in real actions) and he had kind of a fancy life style (as it was mentioned above, Ded Moroz lived in his own residence and drove troika). All these aspects made the Soviet leaders to strike his name off the cultural life of the country. Fortunately, it didn`t last long time. Already in 1936 Ded Moroz and special holiday for children «Christmas tree (ёлка)» came back to people`s life. Of course, the concept of Ded Moroz and thid ёлка-holiday were changed into soviet way of celebrating holiday and beginning from that moment they became symbols of New Year. Also, the decoration of the tree and songs were transformed to more propriate, to more soviet. Anyway, the idea of Ded Moroz wasn’t lost and didn`t change dramatically.

Nowadays Ded Moroz remains the most beloved magician and he still lives in his residence in the city Veliky Ustyug. The whole year people from the entire country visit him there and get an excursion in his house. If people don`t have a possibility to see him personally, he can be reached by post and you can even receive a reply from Ded Moroz! Children usually send him their paintings and share their dreams or ideas about present which they would like to obtain on New Year.

Today we retold you a story about the Father Frost of Russia. Here we also share a couple of links to give you an idea about Ded Moroz, his residence and his post. We hope you enjoy these last days before the New Year and wish you all the best in coming 2021!